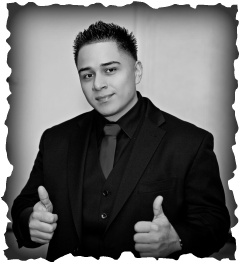 DJ Nyche (Nee-Che) formerly known as Jay Campo was born in Cali, Colombia and raised in New York where he indulged in the diverse cultures and sounds that New York has to provide. At the age of four, DJ Nyche knew music would become a big part of his life. He was given instruments ranging from guitar, flute, piano, bongo and conga to name a few, setting DJ Nyche on a musical path. Aside of his interest in musical instruments, the young DJ Nyche grew a bigger curiosity in musical compilations when listening to what during his early years was called Mosaico Musicales (Musical Mosaics). The beauty of mixing and matching music to create a single track excited the young DJ Nyche and pushed him to look for methods to create his own mixes. At the early stages DJ Nyche began making mixes by attempting to pair tracks off two cassettes players. It was all a mess but to the young DJ Nyche it was a beginning to learning how to keep people dancing.

Furthermore, DJ Nyche began to expand his idea of mixing music by grasping his multicultural surroundings. He diversified himself by listening to Hip Hop, Reggae, Soul, Rock, Freestyle, House and Merengue to name a few. While at home his native sounds of Cumbia, Gaita, Vallenato, Tropical and Salsa still continued to influence his ideas of creating a new sound.  In the latter part of his adolescence DJ Nyche began to make upbeat musical compilations of different genres and artists.  Having good taste in music allowed DJ Nyche to make a name for himself and made him the “Music Man” amongst his peers.

Once graduating High School, DJ Nyche knew he had to go to a school that dealt with the Arts. He enrolled in the State University of New York at Purchase College. During his years there, the mature DJ Nyche began to further expand his passion for music and started spending time in the music department making studio productions alongside his friend and producer L.O.S. DJ Nyche also became the public relations representative and the official Disc Jockey for the Latin organization at Purchase College, “Latinos Unidos” as well as providing his service for the “Latin American Student Organization” at Manhattanville College.   As if it wasn’t enough dealing with school work, laboring eight hours a day and doing public relations, DJ Nyche began hosting a radio show for the SUNY Purchase campus. The show was titled “Sabor Latino” and aired for two years on WPSR 1610AM. It was then during the second year of the show that DJ Nyche was recognized by a fellow student that invited him to interview as a disc jockey for Ultimate Sound DJs in Queens, New York. Eager to work, Dj Nyche took the offer and began to further expand his knowledge of the art of entertaining.

After graduating college, DJ Nyche continued to build his career as a Disc Jockey. He has provided services for Ultimate Sound DJs, Spektrum Music, Top Notch DJs, Nasty DJs Ent, Nightline Vision, ESU DJs, and Kaos Productions. DJ Nyche has catered to crowds that love the 50’s Twist as much as the 70’s Disco, 80’s Freestyle, and 90’s Dance. He has also catered to crowds that enjoy Old School and New School Hip Hop, Reggae, Soca, House and all Latin genres. To better his performance DJ Nyche also did a radio broadcast training at New York City’s prestigious Power 105.1 FM alongside his mentor DJ Chuck “The Triple Threat” Tolbert. Dj Nyche has also had the opportunity to share his musical talents for companies like Nike, Macy’s and Price Chopper. His passion for music has led him to his success as a Disc Jockey and his eagerness for learning more about the art and ambition to become the “next big thing” guarantees his fans a good time.